Alzheimer's and the Unspoken Choice 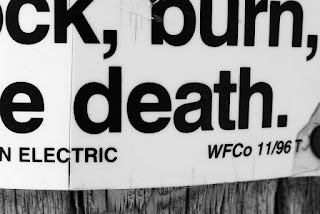 Over time different refrains have run through my mind as I've thought about death. The one most encouraged when I was a child echoes still; by Dylan Thomas: "Do not go gentle into that good night/Rage rage against the dying of the light". We are encouraged to fight it, til the last, and through that fight find strength and dignity. I think about death now, as I experience my mother's decline due to the terminal illness, Alzheimer's.

I say "terminal illness" with purpose. Writing about my mother's disease in a public space is not something that comes easily to me, nor do I plan to detail her journey. Many others have written with great elegance and heart-felt tempo about their experiences of the parent's or other loves ones slow, inexorable decline and to them I nod. So too do I nod to the many clinicians, researchers and associations who know much about Alzheimer's and to who I am grateful. Most recently Fight Dementia's Models ofDementia Care:Person-Centred,Palliative andSupportive was of particular use as I revised my mother's end of life care plan. (It has made a difference already).

Instead, I want to reflect on a thread that runs through some of the pieces I have read (and to which I don't intend to point, as those author's have a right to their own experiences and views without my critique). The thread is this: the notion that a loved one with Alzheimer's should not be told of their disease because "there is no cure" - on the basis "what would be the point" or  "it would be cruel to know".

Currently, there is no cure for Alzheimer's. It is a terminal illness, often portrayed with a soft focus in movies like "Still Alice" or smiling photos of a ill mother and a daughter, that do much to challenge stereotypes, but not to open up to public discourse to "the other choice" which is choosing to die such as assisted suicide. There is a point for those with Alzheimer's to know because it belongs to them to decide to live or die if they know early enough. There is also a point, because they have a right to know what is happening - because what is happening can be frightening and confusing - even if they need to be reminded frequently. To rage in a different way against the dying light. But as a society, assisted suicide in the context of Alzheimer's is an unspoken choice. It's heartening to see positive aging stories for those with Dementia and Alzheimer's. But again, these stories portray those not yet in an advanced stage, which can go on for many years.

Lack of insight happens in the early stages of Alzheimer's, and so many in forums talk about how hard it is to convince a loved one that they may need to be checked for cognitive decline. Certainly this was true in my mother's case, and this delayed her diagnosis for far too long as we battled our way through. This is why I am such a strong advocate for early diagnosis where-ever possible, and an honest exploration of the options if diagnosed.

I am not alone in my view (as a daughter of a parent with Alzheimer's) that I have no intention of going through what she has gone through if I can at all avoid it. And I also know, as a carer, that the "unspoken choice" must come early, or not at all, following diagnosis. I have a right to make that decision, not my children. It's my life, not theirs, and my information to have, not theirs to withhold.

I've been lucky to have Mum in my life, even with Alzheimer's - even now, as she stares as if sightless into the darkening light. There is the kernel of her, somehow, somewhere, that I cling to, and miss, day after day. She eats every meal, and that astonishing will to live that she has, burns brightly. Had she known this is what her end of life would like like, would she have taken her own life? I can't answer that question. I can say that nothing prepares you for the experience of the end of an Alzheimer's sufferer's life, and as far as I know, there are no truthful portrayals of exactly that available to give a true and realistic insight into it's desperate indignities.

But I have paid witness to it. Yes, Alzheimer's was first named in 1910 but I am among the first generations to experience our parents live longer lives, and for some of us experience a parent dying from Alzheimer's. My mother's parents died in their 70's, both suddenly. My generation? We watch, read, inform ourselves, care, fill in the endless paper-work, make endless decisions, and love and grieve. We do the slow goodbye, the slow decline. Wipe the chin. Sing. But too often, we do not tell the truth about it. We romanticize, wanting to protect our loved ones and ourselves from the truth. Or we stereotype, taking the human away, when so little human is left to take.

My brother looked it in the face and said to Mum "You have Alzheimer's.You're dying." It was the truth. She was glad to know. He cried, I cried. Throughout the early stages of her decline, she'd say "oh that's right, I have Alzheimer's. I read about that didn't I". I still have her hand-written notes trying to diarise her life, thinking this was it's decline, not knowing the decline was a long way to come, and a long journey down. And she wanted me to donate her brain to science to help find a cure. Pragmatic, stoic, inquisitive, she had a right to know. She needed to know because she experienced her decline in a visceral way that she puzzled to understand, and which distressed her, always proud of her intelligence as a working class woman who managed to do her first degree when her five children were grown. She found it hard to explain it to herself without knowing her diagnosis.

I whisper still to her, close up with my breath at her ear, how brave she is, how proud I am of her, how strong a woman she has always been and is still, to face her illness in the way she has. I hear her breathing relax, I hear her random yelling settle. Impossible to know why, and Alzheimer's leads you sometimes to simply be in that moment, generous and warm.

But for Mum, it was too late to make the "unspoken choice", and as I asked above, had she understood, had she known what I her daughter knows, would she have chosen to leave early? Again, I don't know. I am guessing not.

I believe the unspoken choice needs to be spoken. Yet, this is where talk of palliative care stops the conversation. My mother has wonderful care, and yes, a palliative care plan is in operation. But this should not stop the bigger conversation about the unspoken choice. Assisted suicide as an end-of-life plan has tremendous agency and dignity for someone diagnosed early with Alzheimer's and still able to decide their life's journey, knowing that at this present time no cure exists, dying is not only long, but characterized by significant and irreversible cognitive decline.

In Australia, there is no right to euthanasia, assisted suicide or "rational suicide" as it was called in the case of Beverley Broadbent. More importantly, public discourse about an illness that will effect millions of us is in the background of diseases like breast cancer. It is too hidden, too misunderstood in popular imagination, too "new" for us in the sense of our collective experience of the long goodbye.


In a way, my mother had no choice. We knew nothing about Alzheimer's before her journey took us down that road, and we certainly never expected this bright, remarkable woman to experience cognitive decline. We misread many of the early signs. Misunderstood much, learnt much, felt much. Much I cannot forget, and more still that I do not wish to go through. But the thing her generation of feminist women fought for, was for their daughters to have the choices they did not have. I had the choice to go to university, to control my fertility, to gain a doctorate, to be paid well. But so too should I have the harder choices she did not have - to die at my time of choosing.

Perhaps I too will have no choice. Perhaps I'll be proactive in seeking an early diagnosis too late to still be sufficiently aware to choose. Perhaps the moment will elude me, or the "good night" seem too long. I am my mother's daughter with a will to live bright and bold. But so too may I find courage to go bravely into that good night.  Perhaps, as many of my age hope: they will find a cure. I hope pro-active early-diagnosis won't reveal the disease tomorrow, or next year, or in five years time. I'm not ready - there is no "ready". That is the painful irony of Alzheimer's. Not only is it the long goodbye, but an early diagnosis met with a decision to end one's life means an ending whilst one can still decide. Full of life, love and hope, not yet ready to go. If it was tomorrow, would I begin to make preparations?

Who knows? Life is like that. There's the theory one has about it, then there's what really happens. But if I do know early enough (and I differ from my mother because I have seen what she did not) the unspoken choice will be on my mind. That is my right, and the right of all our loved ones who still hover this side of self-determination on the journey towards ending. Dying well, whether at the point of early diagnosis or years later at end-of-life, is important. So too is having the choice.