Recently I tweeted that "the cultural practice of equating the PhD/Supervisor relationship to marriage is highly problematic" in response to something that landed in my feed via @ANU_RSAT. This is not the first time I've heard someone liken the PhD/Supervisor relationship to marriage. Basker & Russo 2005 (in Avison et al 2013) identified 11 metaphors commonly used to describe the PhD/Supervisor relationship - and one of these was marriage, "where the student and supervisor are very close in their relationship, indeed extending beyond an academic one and often beyond the dissertation period, referred to as an "intellectual romance" by Baskerville & Russo (2005). The "marriage analogy" is explored by Delamont 2001, and by Galt 2013 in an extra-ordinary piece that equates the contract between the supervisor and PhD candidate with a "pre-nuptial agreement" because "this may be the most important relationship they have had in their lives, and it is a little bit like marriage". Cheema's 2015 guide, like many others that can be found on the web, offered this advice: "I know there are subtle differences but the relationship between a PhD student and advisor is a lot like a marriage - compatibility is very important. If you have different priorities, goals and personalities, both of you will suffer". There are many others who use this metaphor.

So: the marriage-like metaphor. What's the problem? Here are 7:

1. A PhD-Supervisor relationship should be a professional relationship.
I've been in close professional relationships at work, and never once had those relationships described as a marriage. Because they aren't. They are relationships governed and mediated by numerous policies, laws and expectations - just like a PhD should be. A PhD-Supervisor relationship should be a professional relationship, even if there are weekly meetings for many years, mentoring and so on.
2. A PhD should be a professional program of research training.
There is no reason at all for describing the artifacts of PhD study in marriage-like terms. A project proposal is a project proposal, not a pre-nuptial agreement. A progress report is a progress report. Confirmation of candidature is confirmation of candidature. There is no need for metaphors. Imagine if a Head of School described an academic's annual performance management review as a marriage-like guidance session!
3. Academics, including PhD Supervisors, need to shift paradigms and stop seeing university students as empty vessels  (by implication: virginal bridges and grooms?) who have just left school, or have yet to hold down a real job if they are postgrads. Infanticising university students happens even when they are clearly in their late 20s or 30s, 40s, 50s and so on. The terms "early career researcher" and "early career academic" reflect the failure of universities to understand that adults bring rich and complex lives to UG and PG study, and many are not "early" at all anymore. (On a personal note - I did my PhD with two children in tow, and a fully developed career, in my 40s. It would never have crossed my mind that my supervisory relationship was anything like a marriage, and had this been suggested I would have found it totally inappropriate).
4. PhD candidates should be empowered to expect good supervision, in a way quite different to the expectation of a "marriage". This is a much needed shift in thinking that should be stated up-front at every commencement program, and in every PhD handbook. If a supervisor's behaviour is poor, then Universities and PhD candidates should not accept it. If bad things happen during supervision, then a zero tolerance approach should be in place. 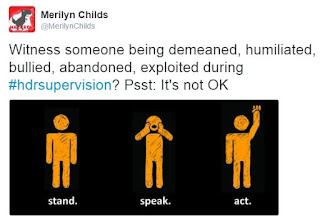 Anonymous Academic had something interesting to say about this (December 2015). The marriage-like metaphor in no way helps candidates to expect good supervision - after all, it is marriage, or marriage-like, relationships that provide the social contexts for domestic violence and intimate partner abuse.
5. The marriage-like metaphor implies a heteronormative relationship (eg the implied normative values), which should be thoroughly debunked by those involved in fostering the quality of postgraduate research programs. The ACOLA Review 2016 argued that increasing emphasis needs to be placed on supervisory panels, and on industry partnerships and internships, as part of improving the quality of the PhD. The marriage-like metaphor exists in a paradigm that fosters neither. (See Hudak & Giammattei (2009) for an interesting read about heteronormative assumptions about marriage in the context of therapy - but note even without these assumptions, the marriage-like metaphor fails). The PhD candidate is best served by rich, complex, diverse relationships including peer-to-peer, self-to-lifeworld, self-to-sector, and so on.
6. The marriage-like metaphor stops questions about the "one Principal Supervisor throughout" paradigm. The current paradigm of PhD supervision is that the commencing supervisor in Year 1 should be the graduating supervisor in Year Whenever. This way of thinking stops the design of models where fabulous supervisors of the first-year-PhD-experience then hand over to those talented at supervising thesis/ thesis by publication /creative works. The Higher Education Standards Framework (Threshold Standards) 2015 do not require that the Principal Supervisor be there at the start and the finish, but rather that:


4.2.3. Each research student is supported by continuing supervisory arrangements, including:
a.  a principal supervisor who holds a doctoral degree, or has equivalent research experience, and who is active in research and publishing in, or otherwise making original contributions to, a relevant field or discipline
b.  at least one associate supervisor with relevant research expertise, and
c.  the principal supervisor is a member of the staff of the higher education provider, or has a relevant adjunct appointment, or is otherwise formally contracted and accountable to the provider for supervisory duties.

Supervisory monogamy should be questioned as a model. However, this is difficult because the academic who is appointed as Principal Supervisor accumulates reputational goods throughout the PhD, such as joint publications, brand recognition, budgets, promotion, and so on. There are weighty driving forces against change.

In a professionally networked, constantly evolving digital world like this.... 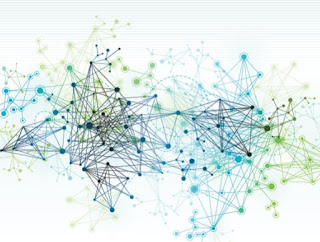 ...it's pretty hard to sustain an argument that a PhD/Supervisor relationship should look like this: 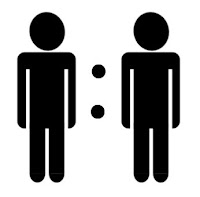