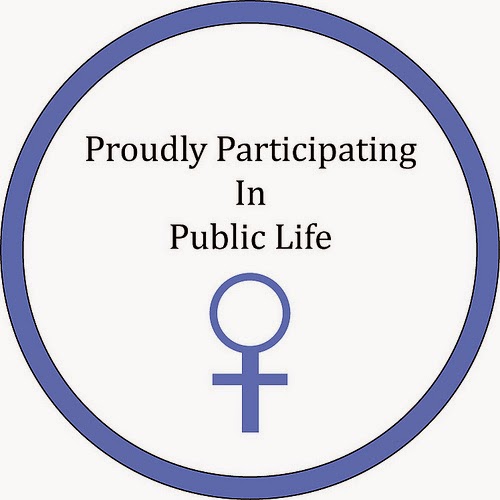 In the weeks following former Prime Minister Julia Gillard’s now famous “misogyny” speech on October 10th 2012, I asked a friend to design me a digital image that I could use to celebrate my contribution as a woman to public life. The image - let's call it a digital badge - in part showed solidarity with the Prime Minister, and in part validated my role as a woman making a feminist difference. Standing up, and shouting out, is part of a vibrant democracy. Resisting oppression, arguing and acting against racism and sexism, caring about social and environmental well-being are all valuable to democratic participation as are social protest, political rallies, unionism and other forms of social and industrial participation. Critical thinking of the non-compliance-rebellious-and-resistance-kind are as important to a just world as is compliance, obedience and alignment. Indeed, many Universities have validated these aspirations to build a better world as graduate qualities or attributes through notions of global citizenship.

As #digitalbadges take their place in Higher Education, they have tended to focus on institutionally approved tasks, qualities and characteristics of ideal HE student learning, for example:


Or validating the ideal educator, for example, as under development by Robinson College of Business for Badges for Executive Education. I have no argument with these badges ecosystems per se. I do have a problem with what is being left out. What about a different badges ecosystem that validates skills and capabilities related to graduate qualities often touted by Universities, but taken from the angle of rebellion, resistance, rethinking and even revolution? [A word and idea now replaced by the much weaker and very popular "disruption" or "disruptive innovation"].

What about the student who "Asked Revolutionary Questions", or "Challenged Received Knowledge", "Championed Climate Sciences", "Acted With Humanity", "Made The Road By Walking", "Protested Food Insecurity" "Did Democracy", or quite simply: "Transgressed". [Or if one wanted to provide badges that might seriously reflect aspects of University experience you might award ones that really do prepare students for some workplaces: "Lived Beneath The Poverty Line Effectively" or "Un-Dauntingly Faced Casualisation".]

Many "critical thinking" badges have emerged since digital badges were popularised, often showing brains or  cogs as brains, lightbulbs. Here is the DeakinConnect critical thinking badge:

What about "critical pedagogy"? Or even "progressive education" as described by Dewey? Critical-thinking-in-action. Education-for-social-action. For example, evidence of questioning injustice and doing something about it? As badges are designed, do they value evidence that might capture the untidiness of working on, rather than thinking about? Is there an implied set of approved contexts and actions? As badges are developed, what do they construct, what do they exclude? What is silenced?

What about badges that validate through evidence an academic who "Championed Casual Staff", "Fostered Radical Practice" (now there is an outdated idea), "Challenged Bullies", "Made a Feminist Difference", "Creatively Questioned Change", "Constructively Aligned to Social Justice", "Everyday Hero", "Listened", "Defended Democratic Processes" or "Humanised"?  Do we value these workplace actions, or take them for granted as the annoyingly necessary in an otherwise compliant world?

In a thought provoking article, after the shocking images of Abu Ghraib, Giroux (2004) asked "What Might Education Mean After Abu Ghraib: Revisiting Adorno’s Politics of Education?" He proposed that "As a political and moral practice, education must be engaged not only as one of the primary conditions for constructing political and moral agents, but also as a public pedagogy - produced in a range of sites and public spheres - that constitute cultural practice as a defining feature of any viable notion of politics, education after Abu Ghraib must imagine a future in which learning is inextricably connected to social change, the obligations of civic justice, and a notion of democracy in which peace, equality, compassion, and freedom are not limited to the nation state but extended to the international community" (pp.20-21).

If this is the case, then #digitalbadges could be seen as a cultural practice "inextricably connected to social change, the obligations of civic justice, and a notion of democracy". This is not a nice and tidy space of compliance, but an argumentative space of resistance, socially just actions, critical thinking within/against, and acting against oppression.

There is a whole world out there of protest badges that might inspire #digitalbadges of the non-scouting- model-type. Perhaps these might inspire a new way of thinking for validation of the socially non-compliant, the radical nay-sayers, the dialogue-builders, the rebellious-troublemakers, the-fighting-for-social-justice-huffers-and-puffers, the-civic-protesters. [Or the students using iPads because the lecturer is boring. Good choice! "Can Manage Boredom Creatively"]. So what do we value? How do we think society, universities and other workplaces really work? Is it through a mono-dimensional view of utility, or a dialectic that respects the tensions and contradictions that make all of us work daily on building a fair and equitable democracy? When we think about designing a badge, how do we design it's criteria, evidence and standards to ensure they are inclusive of actions at the margins, motivated by the 3Rs?
Some have tried to align badges with socially just learning, for example, the UTC Global Citizenship Program. The "Sustainable Agriculture" example above, also has co-curricular badges for learning. This example shows the positive use of badges for three levels of co-curricular volunteer community services learning - an interesting model, and depending on how it unfolds in practice, potentially an example of progressive education. (Although I am unsure why it is additional to mainstream study, and not part of, but that's another story).

I hope this post generates interest, action, and happy to collaborate.

[See the original 1966 Adorno article "Education After Auschwitz" upon which Giroux based his article.]
More about digital badges and here.

Posted by Merilyn Childs at 2:49 AM